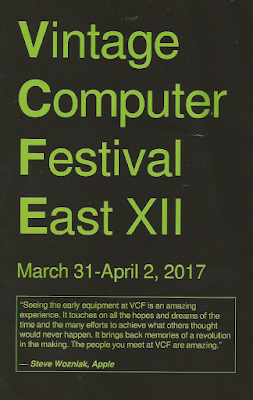 The theme of this year's Vintage Computer Festival was The 40th Anniversary Of The Appliance Computer, celebrating the 1977 releases of the Apple II, the Commodore PET and the Tandy/RadioShack TRS-80.

Friday started out as a normal cold, wet, early spring day at the Jersey Shore. It wasn't raining hard, but it was chilly and raining hard enough. I arrived a little later than I had planned for the first day of activities.


Though I don't currently own any of the vintage computing hardware discussed in the morning sessions, the information presented could be applied to any vintage hardware repair and restoration activities. It was also nice to attend sessions that went along with the theme of the weekend.

All three morning sessions I attended were in Room #2. In fact, all of the talks I attended on Friday were either in Room #1 or Room #2. I never made it to any of the talks in Room #3. Although all of the rooms are in the same building, you can't actually walk through the building from Room #2 to Room #3, as there is an off-limits area in between. You would have had to go outside and reenter the building from the other end. Since it was raining out, I didn't want to go back outside, so I just attend the talks in Room #1 and Room #2. Still, it was a better layout than in the past years were the talks were held in revival tents setup out in the courtyard between the buildings. Those tents got pretty cold!


After my third morning session, a lunch of pizza and soft drinks was available for a few bucks. Shortly after eating lunch, I met up with Master Atari Archivist Allan Bushman, who had driven down from Connecticut for the event. We chatted ATARI for a while and then headed into the next session.

The afternoon started with the Friday Keynote session, Inside The Enigma: The History, Technology & The Real Story Behind Imitation Game presented, by Tom Perera, which was held in the Room #1. For me, Tom Perera's talk was the highlight of Friday. He is an engaging speaker who is full of passion and information on the German Enigma machines. Tom also runs the online-only Enigma Museum.


After the keynote session, and just to round out the appliance-computer-themed sessions, I attended Todd George's session on the Commodore PET.

By 5 p.m., I was burned out and ready to head out for the day. Allan and I headed back to my house, about an hour or so away. After showing him my 8-bit collection, we went out for a late dinner with my wife Lucy at a nearby restaurant, than called it a night.

On Saturday morning, Allan was a great help in loading up our SUV with ATARI hardware and then unloading and setting up our exhibit at the event when we arrived. Unfortunately, we arrived a little later than I planned (again) and with the time it took to set up and test out the exhibit, I missed Bjarne Stroustrup's Saturday keynote on The Origins And Further Evolution Of C++. 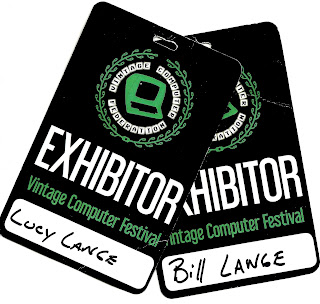 Our exhibit was title ATARI Says Its First Words showing off ATARI 8-bit Voice Synthesizers utilizing the research and details from my previous blog posts Atari Says Its Word based on an Alien Group Voice Box hardware ad and Talk Is Cheap based on a Don't Ask Software ad for S.A.M., the Software Automatic Mouth. Both my wife Lucy and I manned the exhibit on Saturday and Sunday. Allan also helped out at our exhibit on Saturday when he wasn't exploring the rest of the festival.


We had a lot of people stop by our exhibit on Saturday. My brother Jim and my sister Barbara made the ride up from Toms River, NJ, about thirty minutes to the south of Wall, NJ. Mike Montana and his father, Richard "Mr. Glib" Montana also stopped by. Saturday is always the busier of the two exhibit days.

After the event closed for the day on Saturday, some of the staff, exhibitors and guests attended a buffet dinner at a restaurant called Clancy's Tavern in nearby Neptune City, NJ. Allan, Lucy and I spent most of the dinner talking with Vintage Computer Federation director Evan Koblentz.

After dinner, we made the hour+ ride home to rest up for the Sunday session. Allan Bushman departed early on Sunday morning to head home to Connecticut while Lucy and I returned to the InfoAge Science Center for the third and final day of the festival.

On Sunday, Jamie Lendino came by and graciously autographed my copy of his new book Breakout: How Atari 8-Bit Computers Defined a Generation. I reviewed his book in a recent blog post. We also had a visit from Mr. Liber809 himself, Bosey Pitre.


During the weekend, there was one other ATARI 8-bit exhibit by Ralph Dodd, showing off his highly modified ATARI 8-bits. One of the Atari 8-bits had its internal BASIC chip replaced with a chip that can hold 256 different programs and the boot up software can be selected by toggling 8 switches on the top of the case, choosing the binary number for the desired program. Ralph also had an ATARI 8-bit with a internal SD card, an Ultimate Cart and other hardware.


Mr. Peter Flechter was also exhibiting, but instead of showing off his ATARI collection as he has done in the past, this year he had an assemblage of 1980s computers, including an ATARI ST, playing Battle Chess against each other via serial link in a weekend long competition. He didn't have any ATARI 8-bit hardware in his exhibit this year as, sadly, Battle Chess was never port to the platform.

As mentioned previously, the theme of the festival was the 40th Anniversary of the Appliance Computer with the launch of the Apple II, the Commodore PET and the TRS-80 in 1977. These three computer exhibits took up most of the floor space in Exhibit Hall #1. It was a sight to see. The Commodore exhibit was enormous.

At the Apple II exhibit, I got a chance to play an early, in-development copy of Michael Packard's upcoming release Alien Downpour. It is a pretty cool retro space shooter themed game that will be released on 5 1/4 floppy diskette and cassette on the Apple II's 40 Anniversary Release date. There was also an Apple II running the original Castle Wolfenstein written by Silas Warner and published by MUSE Software.


I'm already looking forward to next year's event and I have a couple of exhibit ideas that I am thinking about!