S.A.M., written by Mark Barton and published by Don't Ask Computer Software was a software-only, diskette-based speech synthesizer for the ATARI 8-bit home computers. It was also available for the Apple II, the Commodore 64 and other home computers of the era. As mentioned, S.A.M. was software based and it output speech directly to the TV or monitor speaker. For the ATARI 8-bit version, no additional hardware, speaker, amplifier, power supply, special interfaces or cables were needed.

S.A.M.'s best selling point was its Talk Is Cheap $59.95 (1982 dollars) price tag compared to hardware-based speech synthesizers which could cost in the hundreds of dollars.

There is another review of S.A.M. by John Scheurer on page 8 of the November/December 1982 issue, Vol. 1, No. 4, of Ad Astra - The Journal of the Atari Microcomputer Net Amateur Radio Operator Users' Group. In the review, Scheurer states: "... I am quite pleased with the package and recommend it to anyone who wishes to experiment with voice-synthesis at minimal cost ..."

Beginning on page 56 of the August 1984 issue of Family Computing magazine, there is an article by Louis R. Wallace titled "Buyer's Guide To Speech Synthesizers - Turn Your Computer Into A Talking Machine" that covers S.A.M. as well. Family Computing was a computer magazine published by Scholastic, Inc. It covered all of the major U.S. home computer platforms of the day. The first issue of the magazine appeared in September 1983. The final issue was published in April 2001.

While the output of S.A.M. (and other ATARI 8-bit speech synthesizers) would never have been mistaken for a human voice and the verbal quality is understandable at best, it was a fun and interesting addition to anyone’s home computer setup as shown in the 1983 movie Wargames (though Wargames is not using speech synthesizer technology but rather actor John Wood's recorded voice as the voice of Joshua/WOPR).


A few other programs that made use of Don't Ask Computer Software's S.A.M. speech technology are PokerSAM and Chatterbee by prolific ATARI software developer Jerry White. Kevin Savetz, ATARI Archivist Extraordinaire, and co-host of the outstanding ANTIC The ATARI 8-bit Podcast interviewed Jerry White in January 2016.


From Moby Games: "Chatterbee is an educational game that teaches spelling. It uses the speech synthesizer Software Automatic Mouth (SAM) to read out word and sentences. The program will read a word, then define it in a sentence before reading it out again. The player's task is simply to type the word and as the letters appear on the screen the synthesizer will repeat them. Spelling a word correctly leads to points being awarded and if wrong the player gets two more chances. The game consists of ten rounds each with either five or ten words. There are 25 levels and the player can start on any of them. If the player does well the level will automatically change to a higher one."

Chatterbee is interesting in that while S.A.M. blanks the screen as usual, the bee character is still visible during the screen blank. Nice trick Jerry! He explains it in this article. There is an ad for Chatterbee in the January 1984 issue of Antic on page 9.


There is a type-in BASIC program title Spelling.SAM by Ed Rybczyk starting on page 13 of issue #22 of the September 1984 issue of ANALOG COMPUTING magazine that used the S.A.M. speech technology.

The February 1985 issue of Antic magazine has a BASIC/Assembly Language article beginning on page 63 title S.A.M. Handler - Less typing for your ATARI's voice, which shows you how to set up S.A.M. to work using the BASIC OPEN command. Note that the assembly language listing has an error which is addressed in the Help! section of the June 1985 issue of Antic.

I still have my original ATARI S.A.M. floppy diskette, which I purchased back in the day at The Program Store, a platform agnostic software retailer at the Monmouth Mall in nearby Eatontown, NJ, but unfortunately, the instruction manual and the box are nowhere to be found. 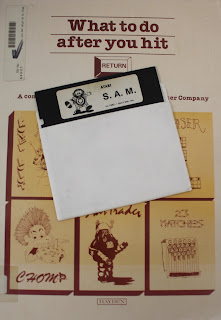 What to try experimenting with S.A.M.? Some interesting projects with S.A.M. could be to add a computerized voice to Mike Mayfield's text-based BASIC computer game Star Trek or Dave Kaufman's text-based BASIC computer game Star Trader. Star Trader appeared in the book What To Do After You Hit Return. It was one of the original space-trader themed computer games. This classic book really should be archived online somewhere. [2017-03-01 And now it is, here.]

If you want to hear S.A.M. sing, check out My Name is Sam by Timotheous Groove!

I also recently wrote a blog post on the hardware-based Voice Box speech synthesizer by The Alien Group.

The June 1982 issue of ANTIC, Vol. 1, No. 2, has a review of two additional hardware-based voice synthesizers for the ATARI 8-bit home computers beginning on page 18.

If your planning on attending the Vintage Computer Festival East XII in Wall, New Jersey during the weekend of March 31st though April 2nd, 2017, come and see my ATARI Says Its First Words exhibit where I'll be displaying a sample of the various speech synthesizers that were available for the ATARI 8-bit home computers.

2020-12-23 Update
S.A.M. functionality has been incorporated into the Fujinet project.