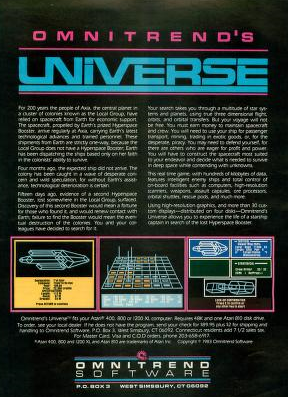 This Omnitrend's Universe ad appeared on page 92 of issue 13 of ANALOG Computing magazine in November 1983.

Universe, designed and programmed by Thomas R. Carbone and William G.M. Leslie III with ATARI 3D Graphics routines by William Volk, is an immersive and complex spaceship simulator and science fiction role playing game. The original version was created on an ATARI 800 in valForth. In addition to the ATARI 8-bit release, there were also versions for the Apple II and the IBM PC. It was Omnitrend's first published game. 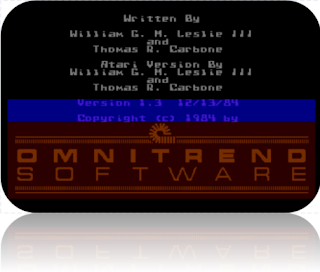 For more details on the ATARI version, Chris Edgar maintains a Universe FAQ which contains a wealth of information on the game including versions, bug reports and possible workarounds.


What is Universe? Great question. Have you ever read the phenomenal Foundation series of books starting with 1951's Foundation by Russian-American author Isaac Asimov? Did you ever play (and hack) Mike Mayfield's text-based BASIC computer game Star Trek or Dave Kaufman's text-based BASIC computer game Star Trader. Have you ever played the 1977 Traveller table-top role playing game by Game Developer's Workshop? Did you ever wonder what Han Solo was doing BEFORE he met Luke? Have you ever watched the amazing, but short lived (with possible reboot in the works) TV series Firefly? Imagine combining all of these and you begin to get the idea. Universe is a highly detailed spaceship simulator were you get to design your ship and then take it out for adventure and profit (legal or otherwise).


Universe is a very involving game. It requires the player to calculate hyper jump coordinates for intermediate jumps between known stellar systems for the navigation computer, calculate minimum orbits for planets in order to launch shuttles and analyze nearby contacts to determine if it is time for flight or fight! It is so immersive and complex, with a detailed manual approaching 100 pages, you could spend an inordinate amount of time outside of the game just planning the design and layout of the equipment aboard your spaceship for optimal energy usage and defense or planning your next Axia to Zeath trade run for maximum profit.


At $89.95, Universe was by far the most that I ever paid for a computer game, then or since. I also purchased the optional Complete Product Guide for another $15 or so. Add in a box of 5 1/4 floppy disks for the player disk and player disk backups, a package of loose leaf paper for notes and some loose leaf hole reinforcements for the well-used manual pages, and I was in for well over $100.00 on one game. This may have been the most expensive (and most complex) game released for the ATARI 8-bit line. It was for me anyway.

If you know of a more expensive or more complex game for the ATARI 8-bit, please leave a comment below and let me know.


The Complete Product Guide was helpful when playing Universe as a trader. It helped to avoid bringing contraband items to planets where they were banned, saving you violations, fines or worse! To be honest, for the price of this game, these few extra pages should have been included as part of the manual.

Universe was one of my top three favorite games/series for the ATARI 8-bit computers. The others are Richard Garriott's Ultima series (Ultima I, Ultima II, Ultima III and Ultima IV) and the Infocom's Enchanter interactive fiction series (Enchanter, Sorcerer and Spellbreaker).

It was a great time to be an armchair star ship captain, within a few months of each other, Omnitrend's Universe (September 1983) came out for the ATARI 8-bit computers, SunDog: Frozen Legacy (March 1984) by FTL Games came out for the Apple II series of computers and Elite (September 1984) came out for the BBC Micro and Acorn Electron computers. At the same time, Trade Wars by Chris Sherrick, a cross between the board game Risk created by Albert Lamorisse, Gregory Yob's Hunt the Wumpus and Dave Kaufman's Star Trader, began to appear on computer bulletin board systems (BBS). Trade Wars and its offspring would go on to be one of the premier BBS door games of BBS era, 1978-ish to 1995-ish. What is a BBS? Check out Jason Scott's BBS The Documentary.

Maury Markowitz had an amazing website that he eventually moved to a Wordpress site were he detailed the history of Mike Mayfield's Star Trek, Omnitrend's Universe and SunDog: Frozen Legacy as well as other space-themed games that shouldn't be forgotten. Additional Elite history and information can be found on co-developer Ian Bell's website and in the The Making of Elite documentary.

Playing Universe when it was first released on the ATARI 8-bit was very frustrating. The game required five diskettes: Construction, Flight I, Flight II, Starport and the player disk. The original release, version 1.1, only supported one disk drive during game play. This version required so much disk swapping, it would grind your ATARI 810 disk drive into a pile of melted plastic and metal shavings! One minor mistake, like pressing the START key instead of the SELECT key at the wrong time, could cause you a quick death in the dark and lonely void of space and the game would format your player disk just to keep you honest! If you didn't have a good back up with detailed notes on where you were and what you were doing at the time, you would have to start all over again, a very lengthy process.

Also, on native ATARI hardware, the speed of the game tended to creep along in areas were graphics, 3D or otherwise, were drawn or when the game performed highly complex calculations such as orbital mechanics or planet generation.

Playing Universe is even better today. Using an ATARI 8-bit emulator such as Altirra (I've had success with Altirra 2.4, but had issues with newer releases of the emulator when playing this game), you can use one of the versions of Universe that supports multiple drive (versions 1.2 or 1.3). This significantly cuts down on disk swapping. Upgrading to a better in-game computer and mass storage device cuts down on even more disk swapping. You can also use the emulator's warp or turbo mode to speed up the slow parts of the games such a planetary scans, hyperjumps, shuttle launches and the like. Finally, if you have multiple monitors, you can have Google docs open on one screen to keep notes and view trading spreadsheets.

Need a good notebook for your Universe adventures? Check out the Galactic Gaming Journal by Urban Realms. Seems kind of expensive at $19.95 for a 300 page notebook, but it looks like it might fit with the genre.

If you are interested in playing Universe, I suggest that you:

Keep judicious notes and back up your player disk often. Using an emulator makes it easy to keep a running back up of player diskettes so your can recover from a player mistake or a game bug (read the FAQ).

Start out as a trader and passenger ferryer. Create profitable trade routes and acquire some wealth. Explore the galaxy. Upgrade your ship's equipment. Try your hand at mining. When your ship is fully equipped with the best hardware, you've explored the galaxy from one end to the other and you understand how all the systems on your ship work, try your hand at piracy and ship to ship fighting.

If you really want to go all out, hack your spare ATARI 400 into a Mission Control Desk and Spacecraft! OK, maybe that is a little much.

Want to try a more modern computer-based space simulator?  Check out EVE Online, Elite Dangerous from David Braben co-developer of the original Elite (and co-founder of the Raspberry Pi Foundation) or Star Citizen by Wing Commander developer Chris Roberts. Watch this video to find out more about Star Citizen. Or for the pen and paper crowd, check out the upcoming release of the Starfinder role playing game by Paizo, the publisher of the Pathfinder fantasy role playing game. There is also (possibly) a pen and paper Elite:Dangerous Role Playing Game in the works.

One additional note, Omnitrend is still around today. While they are no longer in the computer game business, they still have a small and dwindling supply of New Old Stock computer games, if you are interested.

Alright, my shuttles are full of Ore IV, exotic trade goods and impatient passengers. Time is money and I got a hyperspace booster to find.

"Axia Launch Control, this is Seeker Shuttle Two, ready to clear the surface and rendezvous with Spacecraft Seeker in orbit."

"Seeker Shuttle Two, this is Axia Launch Control, you are clear for takeoff."