Have You Read The Reviews?

This Atari's New Word Processor advertisement appeared inside the front cover of January 1984 issue of Antic magazine. By the time this issue of Antic was published, AtariWriter wasn't particularly new anymore. Print ads for AtariWriter, with and without high profile Atari spokesperson actor Alan Alda, had been appearing since at least September 1983.

AtariWriter was reviewed on page 83 of the May 1983 issue of Antic magazine. A more extensive review can be found starting on page 107 of ANALOG Computing magazine, issue #11, from May 1983. Wade Ripkowski over at the Inverse ATASCII Podcast covered AtariWriter in Season 2 Episode 1 of his podcast.

I had the original Atari Word Processor software. My mother bought it cheap when the local J.C. Penney department store where she worked decided to get out of the (in-store) personal computer hardware and software business, deeply discounting and selling off their entire line of Atari 8-bit stock. Add in my mother's Employee Discount and we got it for pennies on the dollar. I found the software to be extremely complicated at the time. I never really used it that much. It seemed to have been developed for professional typists, not some uneducated punk kid from the mean streets of Jersey.  If I remember correctly, we purchased the word processor software before we even had a printer*. Heck, I might of had that software before we even had an Atari 810 Disk Drive. How many times can you listen to the prerecorded audio tutorial on the included cassette tape? I guess it wasn't really as useful at the time as it could have been, but man, it sure looked sexy and impressive on my bookshelf ... "You know, the smart kid down the block, the one with the Atari Word Processor on his bookshelf.  I want that kid on my team, Smalls!" 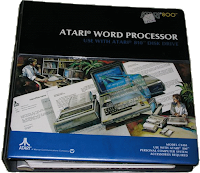 *Technically, you could say we had a printer. My father and my oldest brother, both amateur radio enthusiasts, decided to wire up an ancient teletype machine to my Atari 400 through the Atari 850 Interface Module. It was more of an experiment in can we do it rather than should we do it. That contraption was louder than a washing machine with a bent agitator and those bells, those damn bells. Yes, it printed ink to paper, but the printing was barely readable and the rolled-up cracking, yellowing-paper seemed to be left over from the Great War. It was like something Caractacus Potts would build for his kids or a rejected (or accepted) machine from the Rube Goldberg School of Industrial Design. It worked great for program listings, BBS session dumps or verbose Zork script-ing, but not something you wanted to hand in for a grade at school, at least not a good grade.

Thinking about giving AtariWriter a try? Need more memory for your Atari 800XL home computer for those advanced features of AtariWriter Plus?  Check out the improved and upgraded Rev. G Version Wizztronics 800XL 256K RAM Board from Brad Koda over at Best Electronics released in April 2016. It's amazing to me that Mr. Koda keeps churning out new products. I am still waiting for him to come out with a new character wheel for my Atari 1027 Letter Quality Printer to replace the big black glob of stinky inky goo I have now.

Best Electronics, based in San Jose, California, has been specializing in hardware, software, replacement parts and accessories for Atari home computers and game consoles for well over 30 years.


AtariWriter was one of the most useful non-game software packages that I had for my Atari 400 and later my Atari 800XL home computer during the early to mid 1980s. It was right up there with The Print Shop and whatever programming language or terminal program I was currently interested in. I suspect it was Atari's best selling and most pirated piece of non-game software for the 8-bit family. I extensively used AtariWriter and my trusty Gemini 10X printer to prepare and produce many assignments for both my high school and college classes.

The Gemini 10X printer by Star Micronics was a relatively inexpensive dot matrix printer that had the added bonus of using an easily found, cheap and common universal typewriter ribbon. Typewriter? The Gemini-10X is reviewed in the March 1985 issue of Antic magazine.

This blog post was not written with AtariWriter or Atari Word Processor as the coin mech on my Atari Time Machine is currently malfunctioning.