The Hayes Stack Chronograph was an RS-232C compatible real-time calendar/clock peripheral with a six-digit vacuum fluorescent display by Hayes Microcomputer Products of Norcross, Georgia, USA. It had a suggested retail price of  $249.00 in 1981, which is about $700.00 in today's (2017) dollars. According to Hayes co-founder Dale Heatherington, engineer John Whitten both designed the hardware and wrote the firmware for it.

There is a review of the Hayes Stack Chronograph beginning on page 186 in the February 1982 issue of COMPUTE! magazine. There is another review on page 134 of the March 1982 issue of Personal Computing magazine.


The Hayes Stack Chronograph was part of the "Hayes Stack"-branded family of microcomputer products that came in high quality, brushed aluminum cases and could be conveniently stacked securely on top of each other and be configured with a semi-common Hayes Command Set. Not only could the Hayes Stack products stack on one another, they were designed to allow a 1980s style desk phone to stack on top as well.


A Hayes Stack ad showing the Hayes Smartmodem (a 300 BAUD modem) and the Hayes Chronograph appeared in the November 1981 issue of Personal Computing magazine on page 126.


The products in the Hayes Stack included the SmartModem, the Chronograph, the Transet 1000 (a printer buffer and email storage device) and the Interbridge External AppleTalk Network Modem. You can read more about the Hayes Interbridge in an article titled "Interbridge: Hardware/Software Bridge Services Appletalk Network" by Don Crabb beginning on page 50 in the March 23, 1987 issue of Info World. When robust sales of the Hayes Stack Chronograph failed to materialize, the "Stack" branding was quietly removed from Hayes Microcomputer Products' hardware and marketing material.


Rise And Fall Of Hayes

Hayes Microcomputer Products would go on to dominate the modem market of the 1980s. Their Hayes Command Set would go on to be the gold standard Hayes-Compatible requirement for modems that is still in use today.

Writer Victoria Shannon of the International Heard Tribune covers the history of Hayes in her article The Rise And Fall Of The Modem King.

I recently came across a picture of a stack of Hayes Stack Chronographs on the interwebs. They looked lonely and unloved. I reached out to the owner to see if I could adopt a few, and, after a time, I was able to acquire three of these rare electronic timepieces.


All three units that I received appeared to be in good cosmetic condition, although none of them came supplied with a power cord. I was able to use a power cord from a Hayes 1200 Smartmodem, that I also have in my collection, to power up two of the three Chronographs. One worked perfectly. The other has an issue in its vacuum fluorescent display component, I believe. The third unit uses a different style power cord, which I don't currently own.

What can you use a shiny new Chronograph for, you ask? It makes for a nice, retro-looking desktop clock for one. Hayes' own advertising suggests that it can allow "your computer to accurately record all of your system activities by date and time ...", "Use it for timing everything from lights, burglar alarms, or sprinkler systems ... to sending mail electronically ... logging and recording reports or time-sharing access time ... and batching all your messages to send at night, when rates are lowest."

Heck, maybe you can use it to synchronize your 4th of July Fireworks Display using Robert Veline's Atari 800XL-based fireworks rig and software as reported by Antic Podcast's own Kevin Savetz. Don't shoot your eye out! Kevin also interviews Robert Veline in a recent podcast episode.

Likely, the most useful application for the Hayes Stack Chronograph with an ATARI 8-bit computer system is to keep accurate time and date values for a computerized Bulletin Board System (BBS) and/or to record file write times with your Disk Operating System (DOS) if you have the software that supports it.

To use the Hayes Stack Chronograph with an ATARI 8-bit computer requires the use of the ATARI 850 Interface Module and an ATARI Modem Cable or similar. A typical setup might included a Hayes Stack Smartmodem connected to the first RS-232 port (R1:) of the ATARI 850 and a Hayes Stack Chronograph connected to the second RS-232 port (R2:). In this configuration, you could modify your AMIS, FOREM or other BBS software to communicate with the modem on port R1: and read the time, date and day of week settings from the Chronograph port R2:.


To get my Chronograph to work, I first installed three fresh double-A batteries, which allow the device to keep the time and date settings for up to a year if the unit loses power. I then hooked it up to an ATARI 800XL by way of the ATARI 850 Interface Module on port R1:. Using the BobTerm terminal software program, loaded from a Windows 10 PC laptop running AspeQt software and connected with a USB SIO2PC device and cable, I set the BAUD rate to 1200  and the translation mode to ANSI. I was then able to quickly and easily set the time and date settings, then query them back again using a modified form of the Hayes Commend Set. 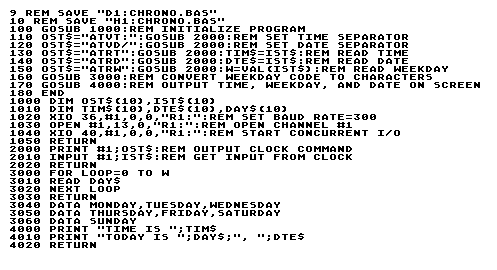 Now that I have a working Hayes Chronograph to use as a kick-ass desk clock, when I have time, I'll test and repair the other two units, purchasing power cords as needed. One Chronograph is destined to be donated to the Vintage Computer Federation Museum in Wall, NJ. Maybe you will see it there at the next Vintage Computer Festival East!

I am also working on updating the ATARI BASIC code to allow me to both set and retrieve the time so that I don't have to run a terminal program to do so. Then maybe, just for fun, I'll dust off my ATARI Assembler/Editor cartridge and recode it in 6502 assembly code.
The Hayes Transet 1000 User's Guide can be found here. The Hayes Transet 1000 Quick Reference Guide can be found here.

Well, I guess its time to move along ...

Paul Rickards has created an upgrade for the Hayes Chronograph to allow setting the time via WiFi. He wrote an article about it on his blog.

A hand drawn schematic of the Hayes Chronograph can now be found on archive.org.

A Hayes Chronograph sold on eBay on March 10th, 2019, for $449.99. The listing included some nice pictures of the original box. 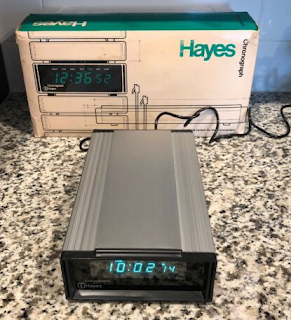 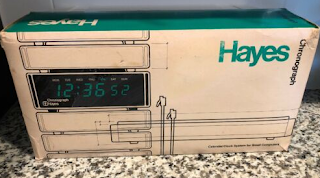 The soldered-in display fuse (toward the front of the unit next to resistor R4) burns out often with these Chronographs. If you have one and the display isn't working, try soldering in a new 250V.125A PICO fuse. If you are missing the power supply, it is a Hayes 13.5 VAC 700 mA 9.5 VA power supply. I have Hayes Chronographs with both the 3-pin triangular and the barrel shaped power connectors on the back.

2021-02-17 Update
Paul Rickards updated his blog Biosrhythm with informational posts about the Hayes InterBridge, and the Hayes Transet 1000.