The Light Pen Is Here! And now it's gone. 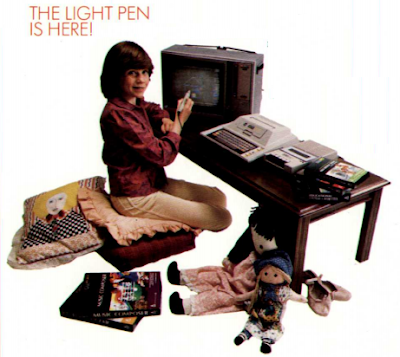 This The Light Pen Is Here ad is from a New Products announcement on page 6 of the premier issue of The Atari Connection magazine, Vol. 1, No. 1., in the spring of 1981.


The Light Pen is here! The CX70 Light Pen is now available and can be used in programs you write for menu selection, games, computer art ... whatever you can dream up! Your Light Pen comes with complete instructions and a cassette containing demonstration programs to stimulate your imagination. Plugging into the controller jack on your ATARI Personal Computer, the CX70 Light Pen is easy to use. It can be used with your programs in all graphics modes in BASIC, PILOT, assembly language and other ATARI computer programming languages.Visit your local dealer now for a demonstration. [Quick, before they are removed from the shelves permanently!]

The Atari CX70 Light Pen was introduced at the June 1980 Summer Consumer Electronic Show in Chicago. From the article Random Ramblings - The Consumer Electronics Show by David H. Ahl, in the September 1980 issue of Creative Computing, the Atari section on page 30 states that


The Atari CX70 Light Pen is a new controller that enables users to paint multicolored screens on the [screen], pick items from a menu, play games, direct geometric calculations, and do I/O operations in Basic programs simply by pressing the pen to the television screen. The Light Pen reads the coordinates of the TV electron beam as the beam passes by. This is a somewhat different approach than used by some other light pens which operate simply on light and dark. The Light Pen plugs into one of the four controller jacks. List price is $74.95.

In the picture, little Lucy is using her sharp, pointy ATARI CX70 Light Pen to draw directly on the delicate, glass-front, high-voltage containing, Cathode Ray Tube of her television, while teetering on a leaning tower of pillows. The light pen is connected to her ATARI 400 home computer's joystick port via a too-short cable. On the table, along with the television and the ATARI 400, is an older style (relative to my 14 year-old self in 1982, which is the crazy way I still think about this stuff, you know, like the ATARI 130XE just came out yesterday compared to the ATARI 400/800) ATARI 410 Program Recorder.

My mom, or more likely my dad, always told me not to sit that close to the TV, that it was bad for my eyes. Of course, I did it anyway, and thanks to LASIK surgery, I still have 20/20 vision! Heck, I'm sitting that close to the monitor right now! Sorry mom!

There are also a few boxes of ATARI software shown in the picture, including the ubiquitous CXL4007 Music Composer and some ATARI educational programs. Strewn about are some pillows and dolls, including the highly popular 1970's Holly Hobbie rag doll. ATARI marketing was always great at showing women and girls, and families for that matter, involved in STEM activities, in a non-exploitative way, in their early home computer ads. Of course, on the other hand, ATARI engineers are also rumored to have code named the ATARI 400 Candy and the ATARI 800 Colleen after attractive administrative assistants. One step up, two steps back.

The ATARI CX70 Light Pen was a large pen styled in the ATARI 400/800 beige (ATARI Sunset) color scheme. Features and specifications of the light pen can be found in a 1980 ATARI Controllers brochure.

At some point before becoming available in any quantity, a decision was made to remove the Atari CX70 Light Pen from the market. The reasons for this remain somewhat murky (to me anyway) to this day. Here's the story...

The ATARI CX70 Light Pen was announced by ATARI with a Fall 1980 availability date. It appeared for sale in various ads from many companies in many magazines.

In the Atari News section, on page 9 of the May/June 1981, issue #3 of ANALOG Computing magazine, it states that:


Light Pens: Forget about them for a while. First last year they were supposed to be released, but a minor software problem held them back (they didn't work on 400's). Now, after a few hundred were shipped they discovered quality control problems. I'm told to hope for next year as Atari has higher priorities.

I wonder if they had to make a hardware change to the ATARI 400 at this point to get the CX70 (and the future CX75) Light Pen to work correctly.

In the next issue of ANALOG Computing magazine, issue #4 in September 1981, the Atari News section follows up on page 9 with:


ATARI LIGHT PEN: I finally found one of the few light pens shipped ... the original release was cancelled because the software included wouldn't work on the [ATARI] 400's ... [on a follow-up release] ... only 200 went out before ATARI realized that quality control on the internal switch was poor with about half not working ... accuracy is not perfect ... sometimes the switch on my pen doesn't work ...it is hard for it to read certain colors like light red ... certain parts of the screen can't be read ...

That is a lot of issues going on for a product with so few parts: a pen-like shell, a photo-diode, a switch, some wire and an ATARI joystick controller port connector, and about 100 lines of ATARI BASIC code.

In the book The Creative Atari published by Creative Computing Press in 1983, John Anderson's article title Build Your Own Light Pen (which itself is a reprint of the Outpost: Atari article on page 276 of the March 1983 issue of Creative Computing) states on page 89 that:


... Atari itself slated a light pen for production. It was to cost less than $100. In the second quarter of 1981, a products brochure that showed the device in use was released. It was a stubby, fat hunk of plastic with a tip switch on it. And what pretty multicolor pictures it supposedly drew ... though the decision to kill it was made over a year ago, the product was listed in a few retail rosters until only a few months ago ... a decision was made to pull the pen. The reasons for this remain somewhat vague. Some have suggested that the tip switch was flaky, making the device unreliable ... Another explanation I have heard from more than one reliable source goes like this: The Atari is designed as the machine for everybody, including novices and kids. Marketing was skitterish about the idea of a tiny kid fooling around a TV tube with a big pointy stick. One false move and gazonga: Mommy finds Billy on the living room floor, a victim of implosion! ... Pull the pen ... This may or may not have been the last straw concerning the Atari light pen. Whether it was or not, the pen was pulled from production very swiftly, and it is unlikely the decision will ever be reversed. A few did manage to get off the assembly line...


The ATARI CX70 Light Pen is mentioned in an article title Light Pen Technology Looks To The Micro by Scott Mace beginning on page 61 in the December 26, 1983 issue of Infoworld:


Gibson [Steve Gibson of Gibson Laboratories, designer of the later ATARI CX75 Light Pen] believes light pens for personal computers have not sold well in part because of a bad reputation garnered by early versions (which he claims were inferior). A notable failure was an earlier Atari light pen, which came with virtually no software. The product was only offered by Atari for a few months in 1981.

Steve Gibson has more to say on light pens in general in an article titled A Tale Of Light And Magic: The Making Of The Atari Light Pen by Lewis MacAdams beginning on page 33 of the Summer 1984 issue, Vol. 4, No. 2, of The Atari Connection magazine.

Whatever the ultimate reason, the Atari CX70 Light Pen was short-lived in the market and very few of them, 200 by some reports, actually made it out of the assembly line, through the channel and shipped to customers. It is now considered a rare collector's item.


Back in July, 2015, I reached out to Brad Koda of Best Electronics to see if he had any "Atari CX70 (not CX75) light pens, the CX70 demonstration cassette CX4124 or the printed manual" available. I was pretty sure that this product was history. Mr. Koda generously had the entire Best Electronics staff scour their immense warehouse and while no CX70 Light Pens came to light, one CX4124 Light Pen Demonstration Program cassette, probably the last NEW cassette available, was found. The Best Electronics shipping department carefully packaged up my order, in the new, improved, recyclable packaging peanuts and shipped it out to NJ.

Once this rare, unopened little gem landed in my mailbox, I captured the CX4124 Light Pen Demonstration cassette, both sides, using my ancient Sony Walkman and Audacity. I then converted the resulting files with the FLAC utility to get the audio in the desired format. I also used a utility I wrote to dump the BASIC program's LISTed ATASCII text to a .PNG image. I zipped up the audio files, the .PNG program file listing as well as photos of the cassette tape to Roland Wassenberg of ATARIWIKI for archiving and inclusion in the ATARI CX70 Light Pen article. I also uploaded the content to archive.org.

Thanks to Brad Koda of Best Electronics for finding the CX4124 Demonstration cassette!


On March 13, 2018, former ATARI employee Cecile Wood-Leguillon posted to the Atari Museum Facebook Group that it is her hand shown holding the ATARI CX70 Light Pen in the artwork for the Box Cover and Manual Cover: "That's my hand ... I remember sitting for the artwork just like it was yesterday."