The Bloodhound ad for the Atari 400/800 home computers is an advertisement that appeared in the September 6, 1982 issue of U.S. News & World Report magazine. There is also a similar two-page version of the ad, publish location and date unknown to me, as shown below: 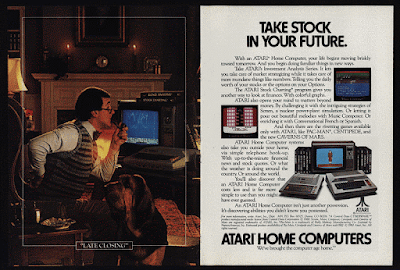 The ad features a man, his dog and his Atari 800 home computer with an Atari 810 floppy drive. Strewn about his desktop are the Bond Analysis, Stock Charting and Stock Analysis software packages, all part of the ATARI Investment Analysis Series. Not pictured, but also part of the series is the Mortgage & Loan Analysis software package. All of these software packages are Control Data CYBERWARE products developed for Atari and manufactured under license from Control Data Corporation.  There is a short review of Bond Analysis and Stock Analysis on page 33 of the premier issue of ANALOG Computing magazine. Wade Ripkowski over at the Inverse ATASCII Podcast thoroughly researched and meticulously covered the Stock Charting program in Season 1 Episode 10 of his podcast.

First up is SCRAM, a nuclear power plant simulation. SCRAM is an educational game program written in Atari BASIC with machine language subroutines. It was programmed by Chris Crawford of Eastern Front (1941) fame. I enjoyed playing this game when I was a kid. It usually took five or six minutes to load from cassette on the Atari 410 Program Recorder. That is if it loaded successfully at all. BEEP...BEEP...BEEP...READY. It sometimes took a few tries to get it working. In this game, it was just as much fun to successfully manage the power plant as is was to lose control of the reactor core and cause a meltdown. This was usually do to an earthquake and loss of one or more of the various water pumps, not unlike the 2011 Fukushima Daiichi nuclear disaster in Japan. SCRAM was shipped on cassette media with an extensive 50 pages almost textbook-like manual. SCRAM, Start Cutting Right Away Man!


Up next is Atari Music Composer which was an early 8K ROM cartridge release in 1979 for the Atari 400/800 home computers. There is an essay on page 85 of the classic 1983 book The Creative Atari titled Atari Music Composer that reviews the cartridge, highlighting it's strengths and perceived weaknesses by a pair of educators.

If you are ready to learn a new language such as Conversational Italian, Brad Koda over at Best Electronics may still have some of these Atari Conversation Language Series titles in stock.

PAC-MAN, a faithful port of the 1980 hit arcade game and 2015 World Video Game Hall of Fame inductee makes an appearance. 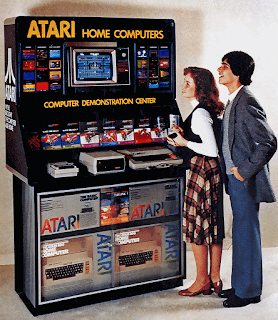 Atari PAC-Man Getting Some Screen Time

Centipede, another authentic arcade port based on the 1980 hit arcade game of the same name is also mentioned. Unless you have been living under a magical mushroom for the last thirty years or so, you know that Centipede is a vertical shooter where you must destroy various bugs invading your garden. The Atari computer version uses a joystick instead of the arcade trackball.

The two-page version of the ad has a screenshot of the game Caverns of Mars. Programmed by then teen-aged hobbyist Greg Christensen, this was one of those rare titles that was originally submitted to the Atari Program Exchange and then, because it was so good and sold so well, Atari licensed it and added it to their main catalog, first as a diskette-based product and then later as a cartridge-based product. Caverns of Mars was eventually backported to the hackable Atari 2600-like Atari Flashback 2 console released in 2004.

Rob McMullen over at the Player/Missile Podcast covered Caverns of Mars in Episode 4 of his podcast. You can find additional information in his show notes.

Christensen followed up Caverns of Mars with the similar titles Caverns of Mars II and Phobos.  Then, as Chris Crawford writes in his essay A Grain of Sand, A Gust of Wind in The Journal of Computer Game Design Volume 5 (1991-1992), Greg Christensen went off to college and "disappeared from the gaming scene". Who knows, maybe the guys over at the Antic - The Atari 8-Bit Podcast will track him down one of these days for an entertaining and enlightening interview.


Interested in creating new levels for Caverns of Mars? Rob McMullen also created Omnivore, the Atari 8-bit Editor, which can be experimentally used to possibly edit maps of some old Atari 8-bit games. You can find an informative discussion of the editor over on the AtariAge website.

The ad goes on to state that the "..Atari Home Computer systems also take you outside your home, via simple telephone hook-up, with up-to-the financial new and stock quotes..."  By simple, might the ad be referring to the Atari Communicator Kit with the Atari Telelink I cartridge, the Atari 850 Interface Module, the blazing fast (I jest) 300-baud Atari 830 Acoustic Modem (a rebranded Novation CAT product), associated spiderweb of cables, technical manuals and desktop real estate requirements, along with the CompuServe and Dow Jones Information Services ephemera? It was so simple, even dad could figure it out.


There are many other software packages pictured in the ad, and yes, I had to get out a magnifying glass to read some of the titles:  Graph-It, Missile Command, Energy Czar, Stock Charting, Conversational Spanish, Atari Word Processor, Mailing List, Star Raiders, Statistics I, Music Composer. Most of these are early Large-Black-Box format titles, my personal favorite. Two of them, Conversational Spanish and Atari Word Processor are packaged in user friendly binders.

Compu$erve? Well, that is an expensive story for another day. !GO GAM-105 ... Welcome to MegaWars III.